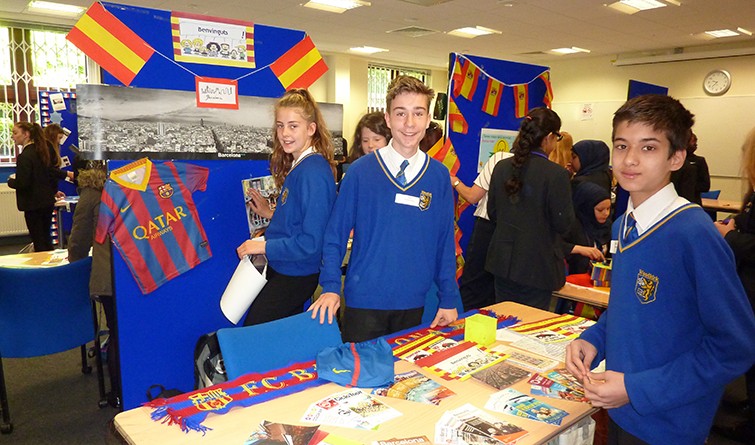 Eurofest is an exciting, simulated, international trade fair, developed by Routes into Languages, a programme funded by the Higher Education Funding Council for England (HEFCE) to promote the uptake of languages in secondary and higher education and encourage the active use of modern foreign languages.

Students are tasked with selling products which they have designed themselves and running tourist information stands. By doing this, they practise their language skills in a realistic, but safe environment, speaking and listening in French, German or Spanish, giving information, answering questions and writing down details.

Woodkirk's Spanish group did a tourism stand on Barcelona and have been chosen to go through to the final on the 11th July! Both German groups had a trade stand. One German group developed and created German 'fidget spinners' using a 3D printer - their product was called 'Zappeln' and this group won the prize for 'Best Sales Technique' The other German group created 'German Speaking pills' - 'Sprachverbesserungsussigkeiten' take one a day and they enable you to speak fluent German and this group scooped 2 prizes 'best Spoken German' and 'Best WOW factor' for a stand.

Out of a potential 9 awards, Woodkirk scooped 4. Hopes are high for our Spanish team! Fantastic result for all involved!!