Woodkirk's Head of PE plays in the seniors World Cup 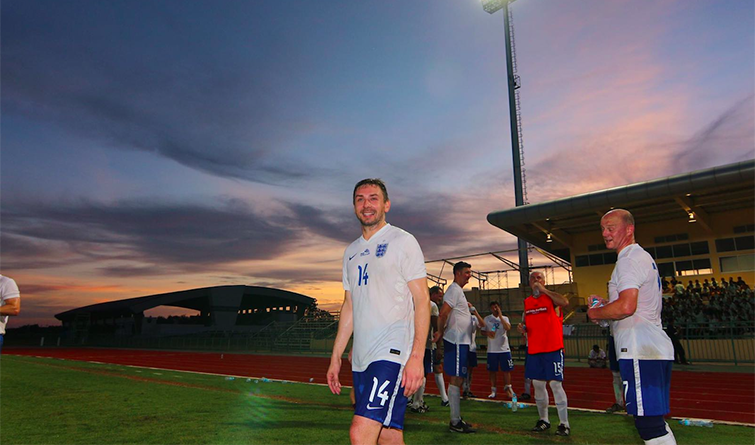 As most of you will be aware, in addition to our participation in the Seniors World Cup, we were recently given FA permission to participate in an additional two games against the Seniors Football Association of Thailand and have therefore spent the last week in Thailand.

Whilst initially requested by ourselves but then intended by the SFA of Thailand as a two match series arranged by the to celebrate the reign of the King, these were subsequently played as a mark of respect to the late King, amidst the mourning period that was in place. Therefore the King's Anthem was played ahead of the national anthems and both sides wore black ribbons.

The trip however was more than just about football, it was an opportunity to build on the relationships we have made in Thailand and we specifically requested that the second match be held in Sa Kaeo, where we had won the Seniors World Cup for the second time two years ago and had received such wonderful support from local schools in that Province. Therefore on this trip we visited the schools of Wattana Nakhon and Bannagam to hold coaching sessions with their students whose ages ranged from 5-15. They were the most amazing days which touched all the players, especially those experiencing Thailand and Sa Kaeo for the first time.

The squad for the two matches, on November 8th in the RBAC stadium on the outskirts of Bangkok and on November 10th in the Sa Kaeo FC stadium were mainly comprised of Over 50s with some "younger" players allowed. Subsequently our squad contained only two from this year's SWC winning squad, as the focus was on our older players and some within the club who had never previously experienced international seniors matches before.

Playing in front of the Bang Kapi University students on whose campus the stadium is sited, our English side didn't get off to the best of starts when we lost both Andy Watt and Justin O'Halloran to injury within the first 17 minutes and it was whist we were momentarily down to 10 men that Thailand scored the only goal of what proved to be a closely fought game. However, but for a number of excellent saves by the Thai's SWC Keeper, it would have been at least a deserved draw, as our counter attacking game plan did see several good chances created on the break.

Two days later in Sa Kaeo, with school children from both the visited schools in attendance, it was to be a different and comprehensive outcome as we did did take our chances to record a 4-0 victory over our hosts. Steve Davey headed in Matty Wain's cross for the opener in the 24th minute and then doubled the lead when he was quickest to react to a dropped cross. In the second half Kevin Mooney's 55th minute corner was headed back across goal by Andy Cox for Andy Watt to nod in from close range. Cox himself rapped things up when he headed in Wain's free kick in the 76th minute.

Two post-match events were held for us and we can only thank our hosts, the Chairman of the Thailand SFA and the Governor of Sa Kaeo for their kind hospitality. They were both wonderful evenings that we all thoroughly enjoyed.

Whilst there obviously wasn't the intensity or competitiveness of the Seniors World Cup, the schedule, contained more involvement with the community and the Thailand SFA andcertainly made this trip one of the most rewarding we have experienced off the field.

We did at the eleventh hour, suddenly find ourselves without a physio for the trip, so a special mention and thanks must also be made to Ton Wittipong, a Physio with Thai Premier League side, Pattaya United, who stepped in to assist us for the games. He was certainly a busy man in the first game and we were delighted to have him involved.